An entomologist at the National Museum of Ireland has discovered a rare collection of exotic insects belonging to the pioneering evolutionary theorist Alfred Russel Wallace.

Wallace was a leading scientific thinker in 19th century Britain and actually co-presented the idea of natural selection with his more famous contemporary Darwin.

Alfred Russel Wallace (1823 – 1913) discovered the concept of evolution by natural selection, which is the process by which living things change (i.e. evolve) over long periods of time. Although the term is most commonly associated with Wallace’s better-known friend Charles Darwin, the idea of natural selection was actually arrived at independently by both men. In fact, the theory was first presented for formal scientific scrutiny by both Darwin and Wallace in a joint series of papers published in 1858 under the not-so-catchy title “On the Tendency of Species to form Varieties; and on the Perpetuation of Varieties and Species by Natural Means of Selection”.

Darwin’s more famous work ‘On the Origin of Species’’ had a snappier title and was published the following year.

Darwin has since become a household name but less attention is paid to the other discoverer of natural selection. For various reasons, Wallace has been written out of popular history to a certain extent. However, during his lifetime Alfred Russel Wallace was quite famous and was highly-regarded as a scientific expert as well as a general public intellectual (think of somebody like the late Stephen Hawking for a modern comparison). 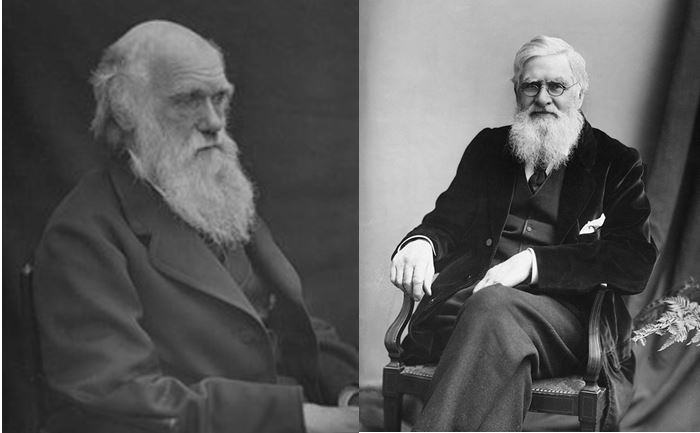 Alfred Russel Wallace occasionally expressed controversial opinions, which certainly tainted his scientific reputation at the time. For example, he was one of the few biologists of his era who was open to non-materialistic explanations for the world around him, and expressed an interest in spiritualism (belief in ghosts/spirits). He also publicly opposed mandatory vaccination against smallpox, an issue that he considered a matter of personal liberty rather than something that should be legally enforced.

Another controversial view Wallace held was that he was one of the few evolutionary thinkers to oppose eugenics and other racist theories that were generally acceptable among Victorian scientists. Additionally, Wallace was controversial through his activism; in being a socialist and proponent of land reform, a supporter of women’s suffrage, and a critic of escalating militarism by the British Empire. He was also a supporter of Irish Home Rule, and visited Ireland in 1882 where he spent a week in Dublin that included trips to the Hill of Howth and to our very own “Science & Art” museum. Little did he know that 6 years later, mementos of his time as an explorer would end up preserved in the same museum.

Though he was outspoken on the social issues of his time, Alfred Russel Wallace remained a naturalist primarily, and his extensive work in ecology resulted in him being the first scientist to warn of the dangers of deforestation, soil erosion, pollution by factories and biodiversity loss – all very controversial ideas when first expressed in 1878 in his book Tropical Nature and Other Essays.

In any case, Alfred Russel Wallace was an extremely important and deep-thinking scientist, and is a key figure in the discovery of the basic evolutionary mechanisms that underline everything else in modern biology.

I was therefore delighted to recently discover some insect specimens collected by the man himself between 1854 and 1862 on his travels around the Malay Archipelago where he discovered natural selection.

Many will have heard of The Voyage of the Beagle – a book written by Darwin describing his journeys around the southern hemisphere. On this voyage, Darwin’s views on evolution began to form as he noticed patterns of similarity among related species on neighbouring islands. Whereas Darwin’s epiphany occurred on the Galápagos Archipelago, off the western coast of Ecuador, Wallace’s inspiration came from exploring the Malay Archipelago, on the other side of the Southern Hemisphere.

In addition to discovering natural selection, Wallace’s exploration of the tropical forests and islands littering the coasts of Singapore, Indonesia, Malaysia, Brunei, The Philippines and Papua New Guinea led to the discovery of more than 5,000 animal species new to Western Science. In fact, 2% of all known bird species on Earth derive from specimens collected during Wallace’s travels!

While the entomology collection also contains a handful of Darwin’s specimens (a story for another day), some of Wallace’s insect specimens from the Malay Archipelago have recently been discovered in the NMI collection. They have been sitting there, unbeknownst to anybody, since 1886. How did they come to be in our collection?

While identifying very old wasp and bee specimens from around the world, I came across some specimens that shared an unusual and distinctive numbering system. There are about a million insect specimens in the NMI collection, and only a very tiny handful of these have an accession number or searchable catalogue entry. Most detective work in the entomology collection therefore relies on thumbing through dusty register books, archived letters, catalogues and manuscript lists. I managed to figure out that the unusual, distinctive numbers referred to a discrete collection of foreign Hymenoptera (the insect group containing bees, ants and wasps), which was purchased by NMI at auction in 1886. The collection contained approx. 400 specimens identified and labelled by a man called Frederick Smith, who had previously been the entomology curator at the London Natural History Museum. Smith was an expert on the Hymenoptera, and was the first to give scientific names to most of the species collected by Wallace on his travels. Before reaching Smith, the collection of wasps was in the possession of another Victorian naturalist – a man called William Wilson Saunders. Saunders was officially an insurance broker in London, underwriting for Lloyds, but like many other well-heeled Victorians he had an interest in natural history. Wallace largely funded his scientific work by selling animal specimens that he captured on his travels to museums and wealthy private collectors. He collected over 125,000 animal specimens from the Malay Archipelago alone. Saunders had purchased a large chunk of Alfred Russel Wallace’s insect collection and would subsequently loan out the unusual insects that he purchased to expert entomologists capable of naming them. In this case, he sent the exotic wasps and bees to Fred Smith for identification. After he died, Saunders’ collection (containing the Wallace specimens) was broken up and sold at auction by Janson & Sons Natural History Dealers. Our own museum was one of those bidders who purchased the collection of exotic wasps and bees for the price of £15 (which today would be equivalent to about €2,500). The collection has turned out to be a treasure of scientific and historic importance.

Even at the time of purchase, it was not known that the collection contained specimens from the then still-famous Alfred Russel Wallace. It is only because of the distinctive labelling style of Wallace that I had any inkling that some of the insects in this particular collection were captured by him – and even then, it was half-accidental. In trying to identify a potter wasp specimen from “Key Is” (=Ké Islands, Indonesia), I came across a taxonomic note from an obscure publication which made reference to the round, pale blue labels which apparently typify Wallace’s insect specimens I’ve since had photographs of some of the labels verified by experts.

I initially thought we had a single Wallace specimen, which would be an exciting find in itself. As it turns out, Alfred Russel Wallace’s travels around the Malay Archipelago are clearly documented by the locality labels preserved on pins beneath several dozen exotic bee and wasp specimens in the NMI entomology collections. They have been hiding amongst the general collection ever since they were purchased.

Some of the Wallace specimens are as-yet unidentified, and I’ve been having great fun figuring out who they are under the microscope. Others are previously-unknown name-bearing ‘Type specimens’. Type specimens are the individual specimens which serve as the reference point when a species is first discovered and scientifically named – think of them as the physical proof that a particular species exists. Fred Smith, who named the collection we bought in at auction in 1886, would have described species as new to science from the specimens sent to him by A.R. Wallace – including several of our own. In this sense, our A.R. Wallace specimens are also scientifically as well as historically irreplaceable. A further few specimens have been on display on the top balcony in Merrion St. for over 100 years!

Continued curatorial work will hopefully, in due course, give rise to a catalogue of these very important specimens so that researchers around the world can access this collection.

Unfortunately, time has not been kind to the cabinet containing our foreign Hymenoptera collections which will need to be re-pinned in new drawers as soon as possible to ensure their continued preservation. 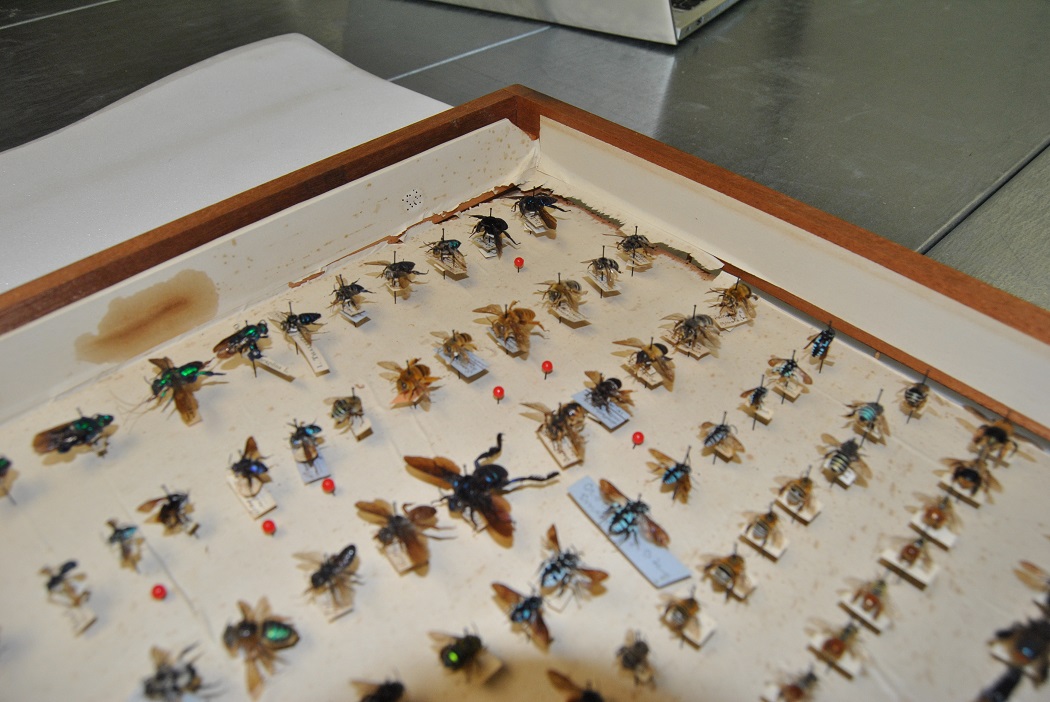 - A drawer of foreign Hymenoptera. Red pins indicate specimens that I have identified as types, based on the original species descriptions given in papers published by Fred Smith.

Since finding these bee and wasp specimens, I have also learned that NMI holds at least one other, non-insect specimen collected by Alfred Russel Wallace – a fruit bat from Sumatra. There was also excitement over two Donegal fish specimens (Arctic char) donated in 1891 by an A. R. Wallace, but these turned out to have been donated by Arthur Robert Wallace – a civil servant from Dublin.