A Bear, a Sea-horse and a Greenlander

The fascinating origins of a possible carved ivory gaming piece

The original museum register entry for this carved figural object reads – “Carving, in sea horse tooth, representing a Greenlander attacked by a bear. Height 2in. Presented with No. 2530". 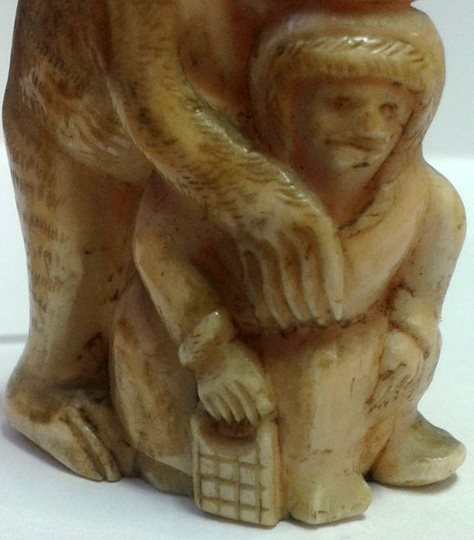 A scene carved in ivory

The object shows a male bear attacking a human figure from behind, locking his paws around their body and opening his jaws to bite their head. The human figure is crouched, dressed in a heavy hooded coat. Small incised lines on the bear’s coat and the hood of the human’s coat are used to show the use of fur and texture. The scene shows that the attacked person does not hold any weapons – only a possible woven bag – suggesting that this is a surprise attack scenario rather than the outcome of a hunting expedition. The piece appears to be carved from the ivory of a walrus tooth – the “sea horse tooth” referred to in the original register entry. It is most likely to be a portable decorative carving, or potentially a gaming piece.

Gaming pieces are a valuable and informative section of material culture for the archaeologist. They enlighten us on contemporary craft materials, recreational activities, and beliefs, themes and stories from the time through their use and visual appearance. Gaming pieces can vary widely in their appearance and materials – ranging from simple stone counters, to patterned or figural wooden or animal bone examples, up to carved ivory depictions such as this one. This particular piece may have been part of a prestige or luxury gaming set.

It is difficult to identify which form of board game this piece may have originated from. There is a possibility that the object may be from a form of bear game. Bear games, or hunt games, are two-player strategy games simulating a hunter and prey situation. There are four pieces involved – three representing hunters, and one representing the prey of the bear. However, most pieces from this game are generally plain and not representative of figural characters. A note on the original acquisition record mentions that the object was supposed to have been used as a chess-man, but this piece does not fit the character of a traditional chess piece in its choice of representation. Due to an absence of clearly distinctive visual styles for comparative dating, it is difficult to assign a date of origin to this gaming piece, and it may range in date from the medieval to the post-medieval period.

Ivory has excellent working properties which make it very suitable for ornamental carving, and the expansion of political and commercial relations with Scandinavia in the medieval period led to the increased popularity of walrus ivory as a craft material. Greenland and Northern Norway are thought to have been important sources for this raw material, and this source may be connected to the identification of the human figure in the piece as a “Greenlander”. It is likely that entire walrus tusks were traded to ivory-working centres, where the raw material was worked into a range of luxury ecclesiastical and secular objects. Experts examining the Lewis Chessmen estimate that up to four gaming pieces could have been carved from a single tusk.

This object was donated to the museum of the Royal Irish Academy in 1857 by the wife of Robert Ball, a renowned Irish naturalist and the father of Valentine Ball, the geologist who was later to become director of the Dublin Science and Art Museum (now the National Museum of Ireland). Robert Ball promoted natural history and zoology through his association with the Dublin University Museum and the Royal Zoological Society of Ireland. It may be possible that this object was a gift or collection piece from abroad by Ball, which may account for the presence of this possible ethnographic object in Ireland.

The Bear throughout History

Bears are an animal which feature in a prominent position in mythology and belief throughout world history. Previously considered the king of the animals and the one closest to humans, a continued form of veneration of the bear can be seen from antiquity until the Middle Ages. This practice ended with the advent of Christianity and actions by the church to combat the threat of the pagan legends and beliefs regarding the power and abilities of this animal. A number of societies throughout time were believed to revere the cult of the bear, and theories exist that the presence of this cult of devotion may even possibly stretch back as far as the Palaeolithic. The influence of the bear can be seen within the art and language of the Celtic influences of the Iron Age, in the berserker tales of Norse mythology and through the use of the bear as a symbol of royal power and dominance in the later Middle Ages.

It is likely that the bear depicted in this piece is actually a polar bear, and the figure of the “Greenlander” an Inuit. The Inuit in Canada and Greenland were one of the societies believed to practice the cult of the bear. The polar bear, the most prized animal hunted by the Inuit, is known as Nanuk, and their mythology proclaims him as a powerful master of bears with shape-shifting abilities to transform to man. Perhaps the gaming piece demonstrates the relationship between the Inuit and the polar bear to the foreign onlooker - their shared natural environment, and their mutual danger to each other as hunters.

This object is not on display and is part of the museum’s Reserve Collections. To see a real polar bear in the flesh, visit our Mammals of the World gallery in our Natural History Museum.

A Bear, a Sea-horse and a Greenlander is located at:
In Storage