A beautifully preserved fossil crinoid dating from the Silurian period, approximately 443 to 416 million years ago.

This specimen is a fossil crinoid. Crinoids are invertebrate animals that occupy marine environments, and include sea lilies and feather stars. This particular specimen is from England and dates from the Silurian period, around 443 to 416 million years ago. The species is now extinct but beautifully preserved in this fossil specimen.

The register entry for this specimen (NG:F649) in the NMI Palaeontology Register states:

This specimen belongs to the species Dimerocrinus decadactylus, an extinct marine invertebrate found in deposits in Dudley, United Kingdom. These deposits were formed approximately 430 million years ago. The crinoid fossil on the hand specimen is approximately 6cm high, 1cm at its widest point on the aboral cup, and it was collected by the Geological Survey of the United Kingdom. Specimens from England, Wales and Scotland were sent to the Geological Survey of Ireland Museum in Dublin, as representative examples. Similarly, Irish fossils were sent to London and other museums in Britain, during the 19th century in routine exchanges.

Dimerocrinus decadactylus was a stalked crinoid, much like a modern sea lily, so called because of their resemblance to a flower. Crinoids are a class of Echinoderms (Phylum Echinodermata), which are typically characterised by a calcareous endoskeleton of distinct plates, a unique internal water vascular system and radial symmetry. Echinoderms include groups like starfish, sea urchins, brittle stars and sea cucumbers. Crinoids differ from those other echinoderm groups by their appearance and how they feed. 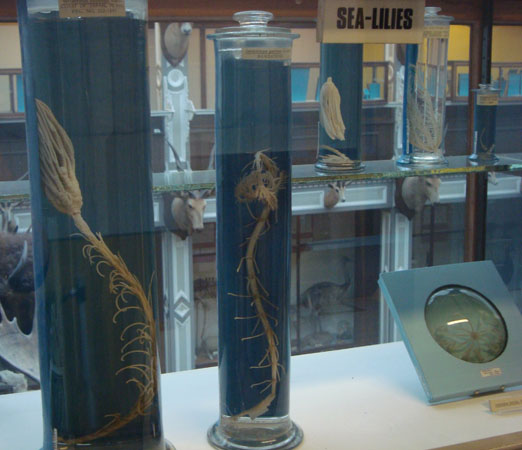 This species of crinoid attached to the sea floor by a holdfast. This allowed it to remain stationary and to feed. A long stem, made up of a series of disc-shaped columnals and held together by soft tissue, provided the animal with a favourable feeding position to filter tiny particles of food from the water current passing over it. An aboral cup, positioned at the top of the stem is composed of a number of calcareous plates. This is where the soft parts of the animal are located, such as the internal organs, mouth and anus. Tentacle-like arms, called brachia, extend from and are arranged around the cup. The arms possess tube feet that pass food from the sea currents down the arms into the mouth, which is located on the upper surface of the cup.

Crinoids are exclusively marine, and usually found in very deep water. Modern crinoids exist in two forms: a sessile, stalked form (sea lilies) where the animal is confined to deep water; and a free-moving stalk-less form (feather stars) where the animal can inhabit shallower waters usually around coral reefs. There are approximately 600 living species of crinoids known today, of which 80 species are stalked sea lilies.

There are around 6000 fossil species of crinoid described so far. Crinoids flourished during the Palaeozoic era (541 to 252 million years ago), and increased in diversity during this time. However, the group was close to extinction by the end of the Permian period (299 to 252 million years ago) and most crinoid species, like Dimerocrinus decadactylus, became extinct at this time due to a combination of factors such as changes in sea level, habitat loss, and increased competition. A small number managed to survive this mass extinction event though and these lineages gave rise to the modern extant crinoids.

While fossil crinoids are abundant, they are quite often disarticulated with only the columnals from the stem remaining. These columnals have been used as decorative items in the past, the most famous example being St Cuthbert's Beads. Fossilised columnals were discovered on Lindisfarne, an island off the North East coast of England, where St. Cuthbert's monastic site was situated, and were strung together to make necklaces or used as rosary beads. In a few places in Ireland, such as the shores of Lough Ennell in County Westmeath, similar disarticulated crinoids can be found, but many Carboniferous limestone areas show abundant crinoids making up most of the rock itself.

This specimen is stored in the Museum’s scientific collection and is not on public display. However, there are many examples of echinoderms on display on the ground floor of National Museum of Ireland – Natural History.

A Fossil Crinoid: Dimerocrinus Decadactylus is located at:
In Storage

A Face From The Past