A collection of painted and stained glass fragments has helped piece together the remains of a shattered history and a lost museum.

One aim of the Inventory Project is to identify and digitally catalogue objects from older collections, such as that of the Royal Society of Antiquaries of Ireland. Among its wide and varied assemblage are over 850 fragments of painted or stained glass, registered simply as follows;

“No. 233. A large number of trays containing portions of glass and lead from St. Canice's Cathedral windows.”

Among this group of fragments are pieces of hand-cut glass, painted using ancient recipes of Greek, Roman and Medieval artists. They include some remains of the famous 14th Century East Window, prized for its beauty and destroyed for its symbolism.

A Display of Worship and Power

The celebrated East Window was commissioned in 1354 by Bishop Richard de Ledrede, a zealous and conservative leader, who found infamy by ordering the first Irish person, Petronilla de Meath, to be burned to death for heresy. Out of the ashes of the Black Death plague arose a new era for St Canice’s Cathedral, which was lavishly restored and fitted with spectacular stained glass windows on its East wall, depicting scenes from the life of Christ.

During the Catholic Confederation of Kilkenny, lasting from 1642 to 1649, the Papal Nuncio to Ireland, Giovanni Battista Rinuccini, was so impressed by the windows that he offered Bishop David Rothe the then considerable sum of £700 to remove and transport them to Rome, perhaps fearing what would inevitably befall them. Bishop Rothe refused. A mere two years later, in 1650, Kilkenny fell to Cromwell’s New Model Army and the Cathedral was destroyed. The re-installed Protestant Bishop, Griffith Williams, would later write;

“And the great, and famous, and most beautiful Cathedral Church of St Keney they have utterly defaced and ruined, thrown down all the roof of it, taken away five great and goodly bells, broken down all the windows, and carried away every bit of the glass (that they say was worth a great deal), and all the doors of it, so that hogs might come and root, and the dogs gnaw the bones of the dead.”

Unfortunately, this process of destruction was not a unique or rare event during the Reformation period. Iconoclasm, the deliberate destruction of religious icons, was seen by the Puritans as a necessary step in ridding Britain and Ireland of Catholicism. This resulted in the majority of medieval windows in England being destroyed. The West Window at York Minster, constructed in 1338, offers us a clue as to what Bishop de Ledrede’s windows may have looked like in their original splendour. 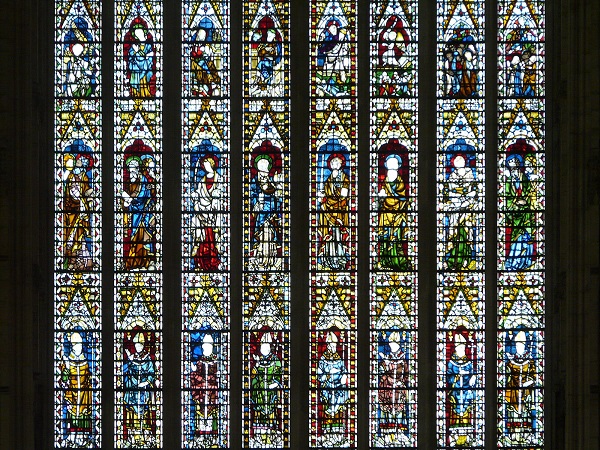 A Society Founded in Turmoil

Before the establishment of the National Museum of Ireland, Irish heritage owed much of its preservation to the efforts of academic societies, such as the Royal Irish Academy. Another important society, founded in the wake of the Great Famine, was the Kilkenny Archaeological Society, which would become the Royal Society of Antiquaries of Ireland (RSAI). From its inception in 1849, the society quickly entered a golden age, spearheaded by the dedicated Reverend James Graves and John G.A. Prim. By the end of the 19th Century, both Prim and Graves were deceased and the museum they had helped to build in Kilkenny was critically short of money. By 1911, it was dissolved and its collection had been transferred to the Museum on Kildare Street, then known as the National Museum of Science and Art.

The window fragments in question were discovered in the summer of 1846, when an excavation of the Cathedral’s ancient foundations, overseen by James Graves, revealed a layer of broken glass extending from the North choir wall. A large wood fire was then discovered nearby which produced, according to Graves, a ‘horse-load of charcoal’, and testified to the unfortunate fate of the window. Masses of melted glass and lead from the fire were displayed as evidence of the army’s attempts to extract the lead from the destroyed windows, to be used for bullets and other armaments. 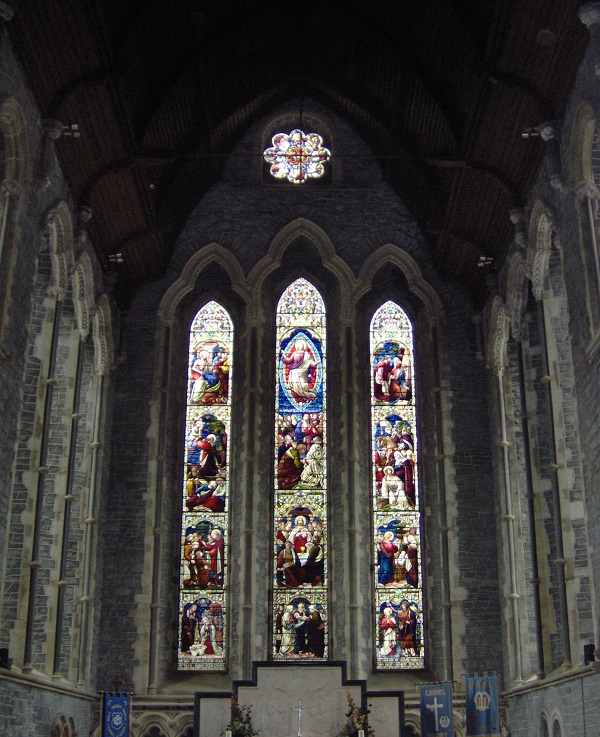 Although most of the fragments are in the National Museum of Ireland - Archaeology reserve collection, you can find some on display in our Medieval Ireland exhibition. The current East window at St Canice’s Cathedral is a replica of Bishop de Ledrede’s, recreated using the original drawings.