The thorny devil - Moloch horridus - is known by several names including the horned dragon, mountain devil, thorny lizard, thorny devil or simply moloch. The name Moloch is purportedly derived from an ancient Middle Eastern god associated with child sacrifices, and also used in demonology to refer to the Prince of Hell. The lizard gained its name due to its strikingly spikey appearance.

The specimen is preserved in alcohol and comprises of the skin of one animal, measuring approximately 17cm in length.

There is a clipping from an Australian newspaper stored with the specimen, it reads as follows:

“The Mountain Devil. The alleged hypnotising of a lobster as described in a recent issue of “The Mercury” writes our King Island correspondent, recalls the fact of Australia possessing a small animal that responds in a most peculiar way to stroking with a small pointed stick or twig, viz. the Moloch Horridus or “Mountain Devil” which is much like a small lizard, with a tough, horny, porous and colour changing skin. This extraordinary little creature will remain for a considerable time just as it is placed on a table. When stroked on the throat it raises its head to an almost vertical position and seems to quite enjoy the sensation of being tickled; similarly if stroked near the armpit it tilts its body to one side. In the Coolgardie rush days a good deal of amusement was often afforded by these little animals, after the “devil” was placed on a table a bystander selected for the [?] would be one standing close to the table, directly opposite the devil’s [?]. The twig or stick was then drawn rapidly along the devil’s back, whereupon it instantly rushed forward and in some instances ran up the vest of the on-looker, much to his consternation. It is said that many years ago specimens of these mountain devils were sent by sailing vessels to England from West Australia and that they were simply placed in a cardboard box without food or water, and appeared to survive the six months voyage with little or no harmful effect. Some people make pets of them and tether them to ant heaps with twine attached to a tiny collar round their neck. Water poured on their backs is absorbed. Some scientists seem to be of the opinion that the Moloch Horridus was at one time probably as large as a crocodile. It is certainly well named as far as it appearance is concerned. At the same time it is perhaps the most harmless creature in existence.”

About the Thorny Devil

Molochs are native to the sandy deserts of Australia. They have developed several behavioural and morphological adaptations to help them cope with the harsh environment they live in. Molochs take refuge in burrows during the warmest and coldest months of the year to help them cope with temperature extremes. During the day molochs will also increase or decrease contact with warm surfaces to help regulate their body temperature.

The moloch is an obligate myrmecophages; meaning it only eats ants. Ants are relatively low in nutrients, so an adult moloch needs eat approximately 750 ants per day to compensate for the lack of diversity in its diet.

The moloch’s spiny surface texture is used as a defence mechanism against predators, but it is also important in helping the animal obtain water in the desert environment. Water condenses on the spines, which is then transported to its mouth through a series of channels at the base of each spine. In the wild the moloch has several predators including the Australian bustard, the black-breasted buzzard, goannas, snakes, dingos, red foxes and humans. When confronted by a predator the moloch will tuck its head under its forelimbs to present a large spiny "false head" at the back of its neck, making it more difficult to manipulate and swallow, thus deterring predators. Other defence mechanisms include camouflage, freezing or puffing themselves up with air to look bigger and more threatening. 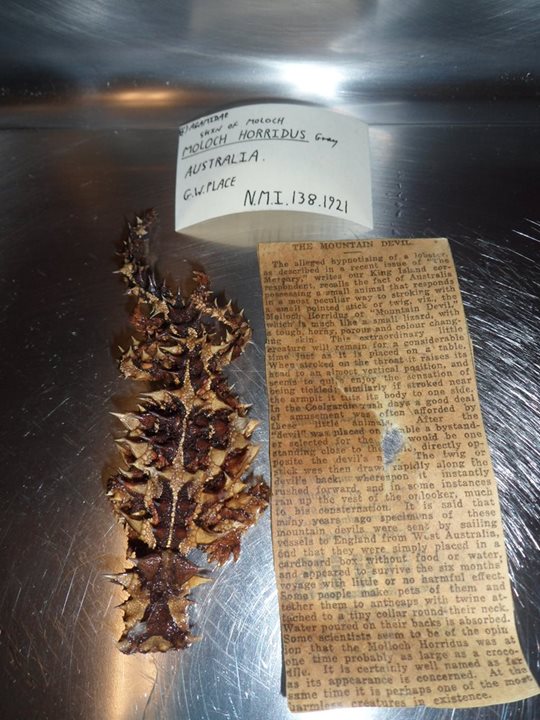 Currently this specimen is not on public display as it is part of the museum’s reserve collection. Interested in Australian animals or reptiles? Why not read about "An Australian Dugong" or "A Saltwater Crocodile", in another of our Documentation Discoveries.

Thorny Devil from Australia is located at:
In Storage