An interesting example of a three-legged Irish chair (the 'Tuam chair'), common in Connaught over 100 years ago, was catalogued in the Irish Folklife Division.

This style of chair is distinctive due to its three legged form and it is made from ash wood. The back rest and back leg are formed from one single piece of wood, 85cm in length and 14cm wide at top. The two front legs splay outwards and are rectangular in section 5cm wide and 3cms thick, tapering at the bottom. The upper ends of the front legs are tenoned into a rectangular board 43cms in length, which acts as the front portion of the seat. 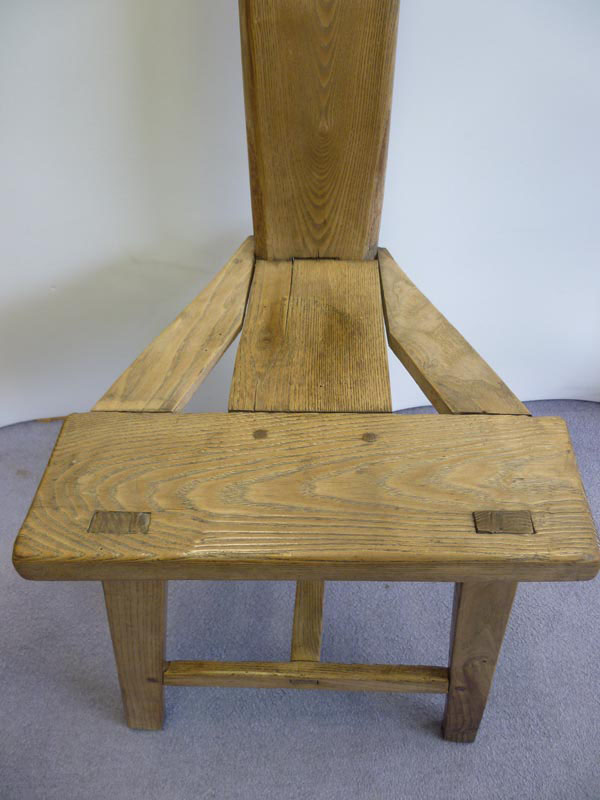 The three other boards of the seat come together to form a truncated triangle or T-shape. The central rectangular board is held in place by two pegs at the front and a projecting tenon at the back with a wedge driven through it (see drawing below). Two side boards complete the seat and give its distinctive shape. 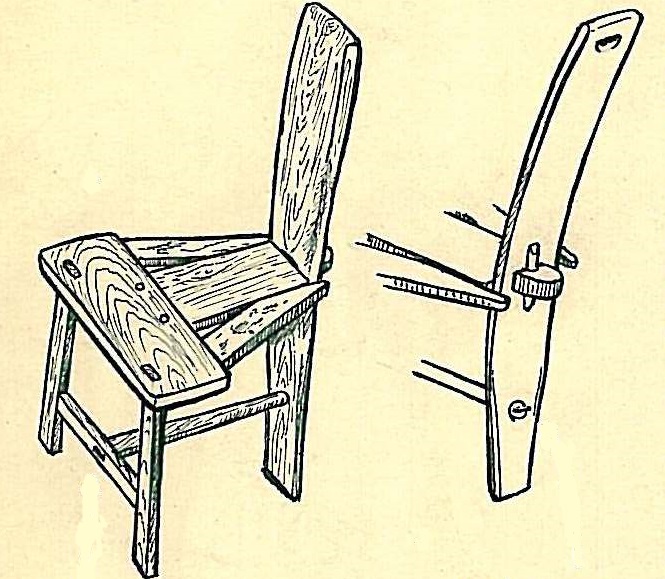 The three legs of the chair are held in place at a height of 16cm by a T-shaped stretcher which is tenoned and pegged into the legs. The stretcher is then secured to the back leg of the chair by another cross-piece.

Where does it come from?

Chairs of this type are known to have been used widely in the Connaught region well over 100 years ago, which gives rise to it being known as a Tuam or Sligo chair. References to this style of chair occur in an 1832 edition of The Dublin Penny Journal accompanied by an illustration entitled The Ancient Irish Chair. However the origins of the design are thought to be much older than this. Claudia Kinmonth in her book on Irish Country Furniture, suggests that they may have been brought to Connaught with planted Irish settlers from Scotland during the seventeenth and eighteenth Century.

This particular example was collected by The Folklore Society of Ireland and is from the Tuam region of County Galway.

What was the chair used for?

Furniture was generally sparse in the traditional rural Irish cottage. The chair formed a very important component of the basic kitchen furnishing along with the table, dresser and settlebed. People sat around the hearth which was the focus of the home, seating would often be allocated according to importance within the house, for example guests would be offered a good chair near the fire. The Tuam chair tended to be more suitable for the uneven floor surface of the rural cottage, with its three legged design providing greater stability.

Three Legged Tuam Chair is located at:
In Storage