This apple snail was collected in Paraguay in the 19th century.

Description of the specimen

This specimen belongs to the species Pomacea megastoma and consists of the shell of the animal. The shell is brownish yellow in colour and measures 9 cm long, 7.5 cm wide and 6 cm high. It is part of a collection of freshwater shells purchased from Mr Sowerby, a member of a renowned family of British naturalists and natural history dealers.

The label found with this specimen reads:

The name on the label – Ampullaria neritoides – is an old name which is no longer in use. 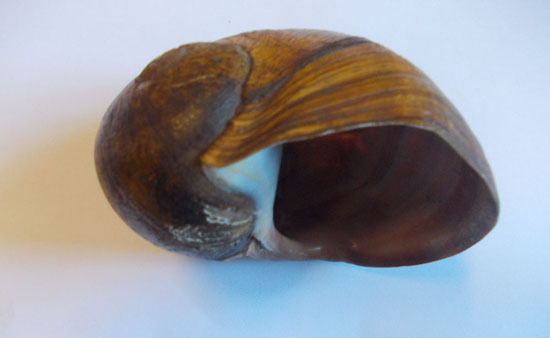 Where do apple snails live?

Apple snails are a family of freshwater snails that inhabit rivers and lakes in the tropical and subtropical regions of America, Africa and Asia. They mostly feed on plants but they can also eat invertebrates such as bryozoans and eggs of other snails.

The apple snails spend most of their life under water; however they can also survive on land thanks to a unique respiratory system with both a gill and a lung. Some species, including Pomacea megastoma, have a tubular siphon that functions like a snorkel enabling them to breathe air when the oxygen levels in the water are low.

In their natural habitats, some species of apple snails eat decaying plant material submerged during the rainy seasons. For this reason they help restore the balance in the ecosystem. They are also an important part of the food chain and thus play a role in the nutrient cycle. They are a food source for many birds, reptiles, fish and crayfish.

Are they invasive species?

Some species of apple snail have been introduced to non-native habitats through aquaculture, the pet trade, modifications in waterways and for use as food and as biocontrol agents.

In many cases introductions have had a negative impact on agriculture particularly on rice crops in East Asia. Apple snails also influence the biodiversity of the new areas by competing with the native species for habitat and through predation.

Invasive species are often very difficult to eradicate from the non-native areas. For this reason it is important to prevent introductions by avoiding the release of pets and monitoring aquaculture practices.

Apple snails are a very diverse family and occupy varied ecological niches. It is thought that some are not very adaptable to changes in their environment and might be in danger because of human impacts. For example, Pomacea megastoma which needs bedrock and running water to thrive might be at risk from reductions in habitat as a result of the construction of dams.

More studies are needed to better understand the ecology of apple snails in their native ranges and evaluate their distribution and conservation status.

This specimen is part of our research collection and is not on exhibition. There are other species of freshwater snails on the ground floor of the National Museum of Ireland - Natural History where you can also find land and marine snails and other Irish molluscs.

Apple Snail from Paraguay is located at:
In Storage