The elephant bird is an extinct species of large flightless bird, which once inhabited the island of Madagascar.

The elephant bird - Aepyornis maximus- is an extinct species of large flightless bird, which once inhabited the island of Madagascar. The little that is known about the life history of these birds has been gathered from the scant remains of bones and eggs unearthed over many decades. The enormous size of these remains has led many to believe they were the inspiration for the giant bird in Marco Polo's legendary tales of the 'Roc'. 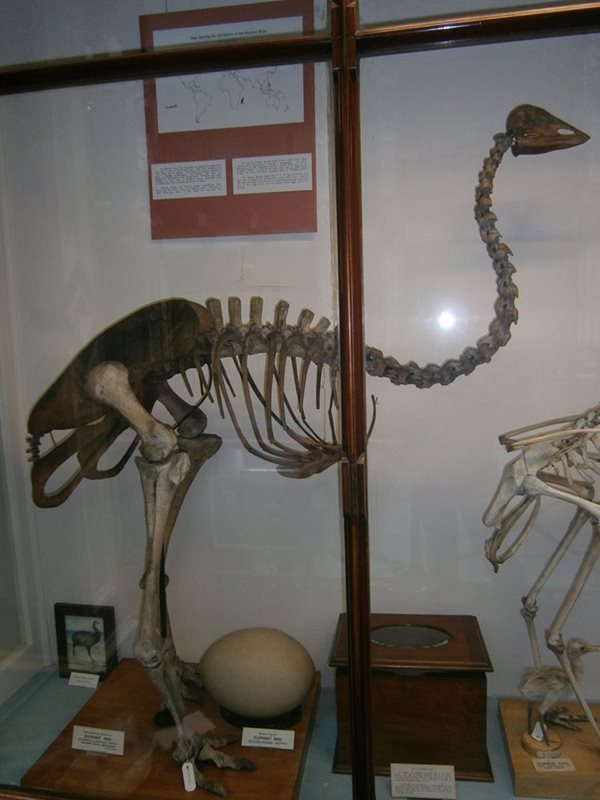 The egg is intact, measuring 40 cm from end to end, with a 65 cm circumference at its widest point.

Egg of Aepyornis Elephant Bird (Extinct); Purchased from Mr Peter D.G. Read, Derryvale House, Roscrea, Co. Tipperary; Madagascar; This egg was originally obtained by the brother of Dr Edward Watson, Fitzwilliam Place, Dublin who was A.D.C to General Gordon (of Khartoum) and collected it on his travels. He gave it to Dr E. Watson who collected rare eggs. Later it was passed on to Mr Read; Markings on the egg are stated to be those of ox blood sprinkled on by natives to exorcise evil spirits. Approx. measurements 11.65 in x 8.38 in (29.6 cm x 21.3 cm)

There are several letters with the specimen regarding its original acquisition. One of these letters from a well-known London auction house reads as follows.

In reply to your favour of 24th, all we know about the Aepyornis egg is as follows:- It was found buried in the earth in the extreme south part of Madagascar (near to Cape St Mary) in a district which is exceedingly unhealthy all the year round & which is inhabited by a fierce and hostile tribe. The natives who found it, bought it to our trading station on the S.W. coast & sold it to our agent there who transmitted it to the head firm in Durban Natal by whom it was sent on to us here for realization. We have since tried to get others, as also bones of the bird, but without success, nor have we heard of any having been found, though it is not possible to conduct any systematic search for same owing to the drawbacks afore named viz. the unhealthy climate and the attitude of the natives inhabiting that part. That is all the information we have on the subject.

The elephant bird belonged to a group of birds called the ratites, which include extant species such as the emu, rhea, cassowary and kiwi. The ratites are distinguished by their powerful muscular legs, lack of a keeled sternum (breast bone), simplified/reduced wing skeletons and lack of flight feathers. Elephant birds were not the tallest of the ratites, standing approximately 3 meters tall, but they were the largest of any known bird species weighing up to 400 kilograms! 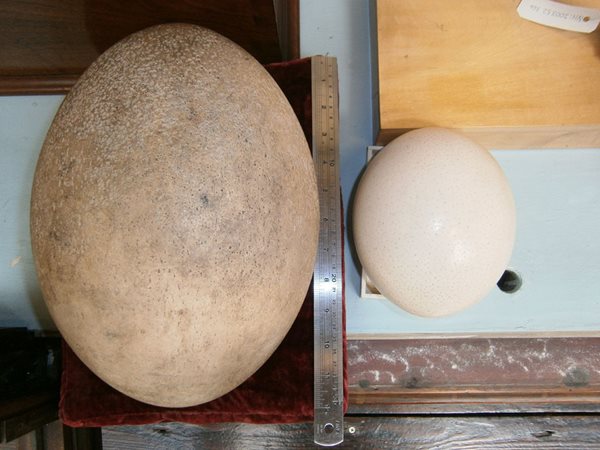 The eggs produced by elephant birds are the largest of any known species, with a capacity of up to 2 gallons, even exceeding dinosaur eggs in size! An elephant bird egg is large enough to hold the content of up to 7 ostrich eggs, 180 chicken eggs or 12,000 hummingbird eggs. Due to their exceptional size, these eggs have long been a novelty item, from Arabian merchants in the 13th century to modern day collectors. The eggs were also prised by the Madagascan natives who used them as domestic tools; for example to hold liquor purchased on trips to Mauritius, or in religious ceremonies.

Currently this specimen is not on public display as it is part of the museum’s reserve collections, but if you would like to see examples of Irish bird eggs you can do so by visiting the Irish Fauna exhibition on the ground floor of the Natural History Museum.

Interested in extinct birds? Why not read about the Moa bird, in another of our Documentation Discoveries articles on Natural History.

Elephant Bird Egg from Madagascar is located at:
In Storage