This fossil is an example of a very large flightless bird - Dinornis novaezealandiae - native to New Zealand. These birds became extinct about 600 years ago as a result of hunting by humans and changes in their habitat.

The skulls and upper cervical vertebrae, also some of the phalanges of the toes and sternal ribs had to be put in from other places. Vide letter No 216 N.H. file”

This specimen of a North Island giant moa, Dinornis novaezealandiae, is an articulated composite skeleton on a wooden mount, measuring approximately 2 metres in height. The skull cast and a loose toe bone are stored in a separate box with the specimen. The robust skull with slightly curved bill is small relative to the body, which has a long neck and sturdy legs. The name Dinornis maximus listed in the acquisition register is a synonym of Dinornis novaezealandiae. 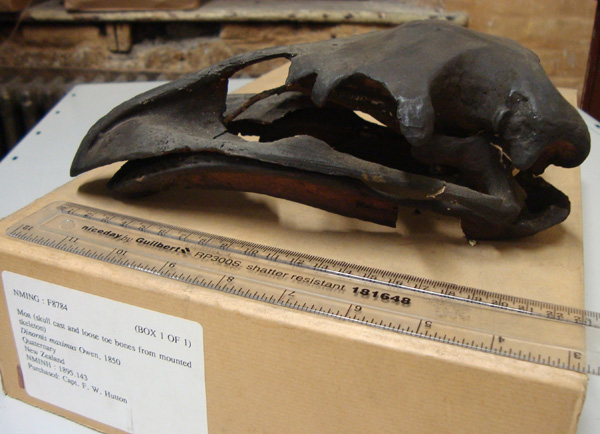 The skeleton of the North Island giant moa specimen was purchased from Captain F.W. Hutton in 1895 for the sum of £30. Captain Hutton (1836 – 1905), an English geologist and strong advocate of Darwin’s Theory of Natural Selection, was a Curator in the Canterbury Museum in Christchurch, New Zealand. He was also professor of Biology in Canterbury College from 1880, becoming a leading authority on the origins of New Zealand’s flora and fauna.

What is a Moa?

Moa are an extinct group of flightless birds, classed scientifically as ratites and closely related to the extant ostrich, emu, and cassowary, as well as the extinct elephant bird from Madagascar. They were first described from a small fragment of fossilised bone in 1839 by Sir Richard Owen, an English comparative anatomist and palaeontologist. Owen discovered that the fragment of femur (thigh bone) had the distinctive honeycomb structure of a bird bone, but this bird would have been much larger than any others known at the time, which was a major discovery.

Moa were the main herbivores in New Zealand, and were widespread in forest, shrub land and coastal dune areas of the North and South Islands. They varied in size, from the very large specimen described here, to small turkey-sized species. Dinornis novaezealandiae was the second largest of the moa species, the largest was Dinornis robustus found on the South Island. There are currently nine recognised species of moa, based on scientific research of museum collections using both morphological and genetic methods.

Why is the Moa flightless?

One of the most characteristic skeletal features is the flattened sternum (breastbone): unlike other birds, the sternum did not have a keel which is a bony ridge where muscles attach to power flight. Moa evolved flightlessness in isolation over millions of years because the food they relied on was easily accessible on the ground. Additionally, while on the forest floor, they were safer from their only predator, the Haast’s Eagle (Harpagornis moorei). Over time, moa wings reduced in size until they disappeared completely, and their bodies became larger and unsuited to flying.

How did the Moa become extinct?

When humans first arrived in New Zealand between 1250 and 1300, the moa became a ready source of food for the new immigrants. Evidence of moa consumption has been found at archaeological sites throughout New Zealand, where large bones have been excavated either as discarded remains on ancient rubbish heaps, known as middens, or as worked pieces in the form of fish hooks. Research suggests that the demise of the moa took only about one hundred years and the moa were thought to have been completely extinct by the time European settlers arrived to colonise New Zealand in the 18th century. Of course the arrival of the newest wave of settlers and the animals (dogs, cats, rats) they introduced had a similarly devastating effect on many other species of birds and small mammals.

This specimen is stored in the Museum’s scientific collection and is not on public display. Other members of this group of birds are housed on thebal cony of the National Museum of Ireland – Natural History (currently closed to the public).

For more information on the past and present ornithology of New Zealand, browse the excellent New Zealand Birds Online website.

Extinct Moa Bird from New Zealand is located at:
In Storage