Trade Union Banners of the Regular Operative Slaters of Dublin

The history of the Regular Operative Slaters of Dublin and its ornate banners.

Among the Museum’s trade banner collection are two that belonged to the Regular Operative Slaters of Dublin. The first, an original nineteenth century banner is painted on a green background with union name “Regular Operative Slators Dublin” at top. The centre white shield with male figures either side bears the trade emblems. Underneath is a second shield with two clasped hands. Motto reads “By love and harmony we support”. The reverse depicts Erin lamenting on a harp. The banner is 247cm high by 207cm wide. 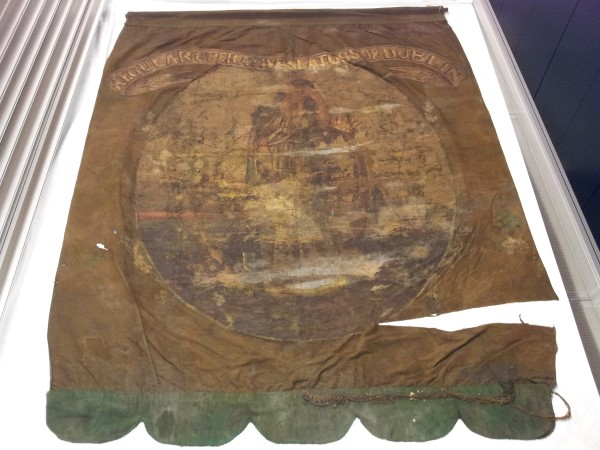 The second banner was made in 1929 to replace the 1800s banner which is in poor condition. This newer banner is painted on canvas and while it copies the original, the artist made changes to the figures and to Erin. The banner is 317cm high by 214cm wide. 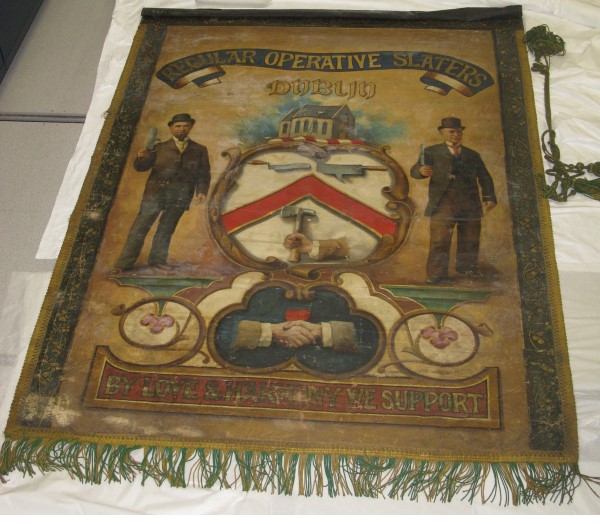 While ‘Slaters’ were listed among the fifty associated trades to march in the funeral procession of Daniel O’Connell in 1847, the Regular Operative Slaters of Dublin Union was formed in 1860. The union carried the original banner in the ceremony procession of the laying of the foundation stone of the O’Connell Monument (O’Connell statute, Dublin) from Merrion Square to Sackville Street (O’Connell Street) in August 1864. In 1875, the union also participated in the O’Connell Centenary procession again through the streets of Dublin. The banner was carried on two poles of polished oak and stood fifteen feet high. The men carrying the banner wore green rosettes and scarfs. The occasion that was the procession was accurately captured in Charles Russell’s painting ‘The O’Connell Centenary Celebrations, 1875’.

What happened to the union?

How did the banners come into the Museum?

The banners were donated to the National Museum of Ireland by T. McDermott, Secretary of the Slater’s Union.

The trade banners are part of the Museum’s Folklife collection, which is stored in Turlough Park and are not currently on public display.

Trade Union Banners of the Regular Operative Slaters of Dublin is located at:
In Storage

Tin Objects Made by Donegal Traveller and Musician