A submerged village near Onnens, Lake Neuchâtel reveals its secrets and offers a compelling insight into long-forgotten traditions of European Neolithic society.

Towards a Comparative Collection

In 1914, the Museum of Science and Art, as the NMI Kildare Street building was then known, purchased a collection of objects at the recommendation of the Keeper of Irish Antiquities, George Coffey, from a Swiss amateur archaeologist, Ernest E. Roulin. Both the Museum and the Royal Irish Academy were, at this time, assembling a comparative collection of artefacts that would attempt to link Ireland to Europe.

Roulin presented an account of the excavation along with a list, in elegantly handwritten French, describing the objects as follows (translated from French);

“Two cranial amulets, i.e. produced with fragments of human cranium. Such revered amulets are of great rarity- only a few have been found in Switzerland. These two specimens are heavily scorched- one of them was fragmented in situ in a very carbonaceous layer”.

Both amulets are sub-oval and have been perforated towards one end- possibly for suspension. The smaller of the two measures 47mm x 38mm compared to c.75mm x 55mm for the larger, fragmented specimen. The edges have been well finished and rounded, which suggests they were worn or displayed as pendants- possibly to draw strength or protection from the world of the deceased or perhaps simply to commemorate past members of the community.

Many lakes in the Alpine region of Central Europe conceal the remains of prehistoric stilt houses or pile dwellings, roughly contemporary with Irish Neolithic lakeside sites like Knockadoon, Lough Gur, Co. Limerick. The sites of Roulin's discoveries, at Neuchâtel, are from the middle Neolithic period in western Switzerland, known as the Cortaillod culture, which places them around 3500BC. The neighbouring sites of Port-Conty, La Lance and Concise also produced perforated cranial amulets which strengthens the case for a tradition, as opposed to a singular practice. While studying the apparent phenomenon of Neolithic trepanning, Swiss archaeologist, Paul Vouga, made clear the distinction between the cranial ‘rondelles’, characterised by the cave-assemblage at La Lozère, France, and the type of perforated amulets found at Neuchâtel. Due to their varying shape and size, he concluded that they were not related to possible Neolithic surgical practices but were possible keepsakes or trophies made posthumously.

The Significance of the Human Head

Although Vouga could only theorise, his ideas do have good grounding. The Neolithic has produced a wide variety of perforated objects that may have served as amulets. We have numerous Irish examples in stone, with the neatly formed axe or pestle pendants being some of the most instantly recognisable. The Neolithic practice of using human remains for such purposes is not unique to the Neuchâtel region either. Excavations at the Greek lakeside site of Dispilio revealed a perforated human molar, with a similar artefact discovered during this season’s excavation in Çatalhöyük, Anatolia. The practice of wearing or suspending human teeth appears to continue into the Bronze Age with one example from La Tombe des Anglais, Espeyroux, France. Wearing or displaying pieces of the human body in this manner may appear unusual. However, the still-practised tradition of retaining human ashes is a similar way of maintaining a physical connection with departed loved ones.

Vouga’s second theory, about a headhunting tradition in Neolithic Europe cannot be supported with much evidence. However, its practice in Central Europe appears in some of the earliest Graeco-Roman historical records. In his “Bibliotheca Historica”, Greek historian Diodorus Siculus described the Celtic habit of collecting heads with a certain morbid fascination:

“They cut off the heads of enemies slain in battle and attach them to the necks of their horses. The blood-stained spoils they hand over to their attendants and carry off as booty, while striking up a paean and singing a song of victory; and they nail up these first fruits upon their houses, just as do those who lay low wild animals in certain kinds of hunting”.

This practice extended to all corners of Iron Age Europe, including Ireland, where the mythical figure, Cú Chulainn, proudly displayed the heads of the three fearsome sons of Nechtan on his chariot, thus establishing himself as the subject of Cathbad’s prophecy; Ulster’s most famous and valiant warrior. 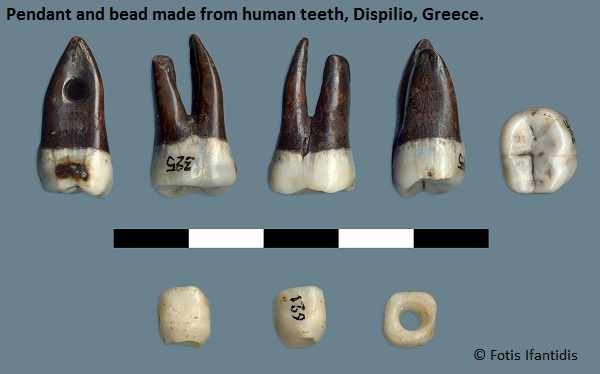 Fig. 4. Pendant and bead made from human teeth, Dispilio, Greece

Two Cranial Amulets from Neuchâtel, Switzerland is located at:
In Storage

Trade Union Banners of the Regular Operative Slaters of Dublin