A hoard of stone axes and a possible axe pendant from Runnacocka, County Roscommon

The original record for the artefacts numbered 1998:5 - 8 reads: “Hoard of four polished stone axes found in the bog at Td. Runnacocka, Co. Roscommon”.

The record documents a collection of four deliberately deposited small axeheads made from shale, sandstone and limestone, which are likely to date to the Neolithic period and which were discovered “at a depth of c. 10 ft.” during turf cutting. 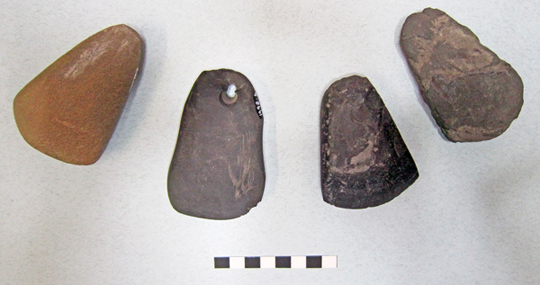 The term hoard refers to a collection of objects which appear to have been deliberately hidden or deposited. Archaeological excavation has shown that hoards of varying object types - ranging from stone and metal objects, to weapons, jewellery and coins - have been present in Europe from at least the Neolithic era up until the post-medieval period.

A number of theories have been suggested for the existence of hoards, whose function and meaning may likely have changed over this long period of time.  A large number of the post-medieval coin hoards may have originated as an attempt to safeguard wealth in times of instability. However, the reasons for the presence of prehistoric period hoards have been opened to further interpretation, with theories ranging from their use as ritual or votive offerings, to their possibility as unclaimed caches belonging to merchants or craftsmen. Popular academic theory has promoted the probability that the prehistoric hoards are likely to hold significant symbolic value and ritual meaning through their deliberate choices and placement of objects. 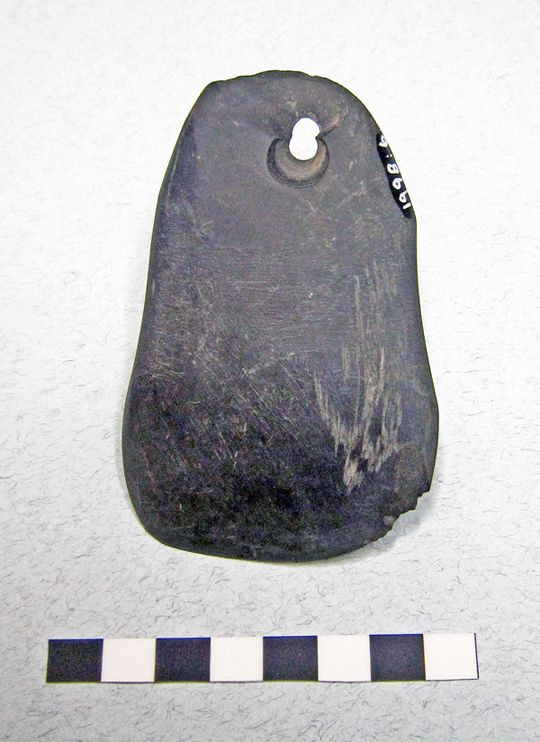 Prehistoric period hoards show a frequent pattern of deliberate choices of placement in wet environments such as rivers, lakes and bogs, as well as in dry ground. Stone axe hoards are commonly discovered in wet environments. This aspect gives credence to their suggested function as votive offerings, as it would have been difficult to retrieve a hoard from such a location if they were originally meant to be temporarily stored and later recovered. At least sixty – seven stone axe hoards are known from Ireland.

The significance of stone axes

Stone axes were in use in Ireland from the Early Mesolithic period until well into the Bronze Age era. They were a common, long-lasting and functional object, which were used mainly as a chopping tool. Further to this, archaeological research has revealed evidence of development over time in their utilisation, appearance and significance, suggesting the importance of axes as both functional and symbolic objects to the people of the past. Examples such as the inclusion of axes as grave goods in burials, the significant placement of axes in monuments and the consumption and value of axes of non-functional size and of non-native stone demonstrate that axes held significant prominence in prehistoric Europe. Specifically, the Neolithic remains of the Breton region show prominent evidence of the consumption of axes made from exotic stone, and a number of the Breton passage tombs show representations of stone axes in their megalithic art.

One of the axeheads from the hoard is particularly unique. The shale axehead (1998:6) is made distinct by a sub-circular perforation through its narrowed hafting butt (See Figure 3). Perforated axeheads are a relatively rare form of artefact. A number of the examples of this artefact type feature this form of perforation located at the butt of the axe. In these cases, the perforation is considered too small to have been used for a shaft, instead potentially forming a means of suspension for an ‘axe pendant’.

Following the discovery of the Runnacocka axes in 1998, a contemporary report by the Irish Stone Axe Project noted the rarity and importance of the find. It observed that at that time, of the approximate twenty thousand stone axes known from Ireland, only thirty-nine examples were perforated. Further to this, the Runnacocka perforated axe was one of only fourteen axes which was perforated at the butt. A further reason for the significance of the Runnacocka axe was that it provided the first clear evidence that the perforation of axes was a practice contemporary with the use of stone axes as a tool. It had previously been suggested that the 'axe pendants' represented a later modification to an originally functional axe - a possible form of wearing an earlier curiosity during a later chronological period.

Axe pendants may have potentially formed a ritual or representational role in Neolithic society. The megalithic art of the passage tomb on the Breton island of Gavrinis depicts several axes, displaying a domestic public object within the private spheres of the burial chamber. Further to this, it has been noted that the Gavrinis interior slab numbered L6 portrays a pair of perforated axes, which may represent axe pendants (See Figure 4). This may possibly indicate the symbolic and societal importance of this form of artefact, and potentially a wider stylistic or ritual European influence from this period.

These artefacts form part of our reserve collections, and are not on display. To see similar stone axes, visit our Prehistoric Ireland exhibition in the National Museum of Ireland – Archaeology.

A Consequential Cache is located at:
In Storage