A richly illustrated deck of Italian Tarot cards, made in the 19th century.

Tarot deck containing all twenty-two tarot picture cards and thirty-two of the fifty-six cards, divided into four suits, which are similar to those in an ordinary deck of playing cards. They have been printed in black and hand coloured. On the Two of Coins is the word “Torino”, the Italian for Turin, which would suggest that this is where the deck was made, probably in the 19th Century, although France was the main centre of production for Tarot cards from the 17th Century onwards.

The suits in the deck of Tarot cards correspond to the suits in a modern deck of playing cards, with one exception: the Knight is an extra card in the Tarot deck. The fifty-six number cards have fourteen cards each from the suits of: coppe (cups/hearts), danari (coins/pentacles/diamonds), spada (swords/spades) and bastoni (wands/staves/clubs). 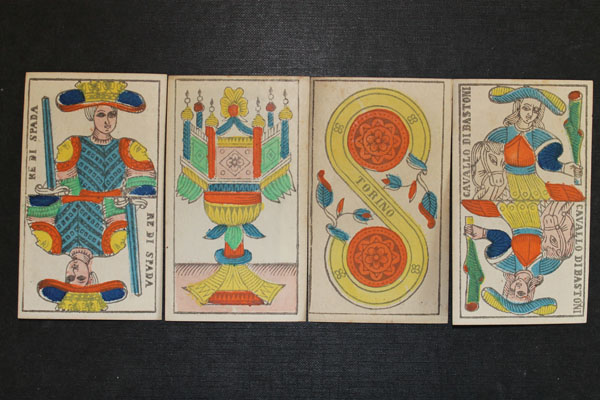 Cards and Card Games in Europe

Probably the earliest reference to playing cards of any sort, in Europe, is to be found in the writings of a German monk living in Switzerland, named Johannes. In 1377 Johannes describes a deck of fifty-two cards, not unlike a modern playing card deck. Although Johannes was very much in favour of card games, the same cannot be said of his fellow ecclesiastics, and the spread of card games through Europe was marked by denouncements and bans by both the Church and civic authorities.

Playing cards are known to have reached Rome by 1422; however, there is no mention of the additional twenty-two tarot picture cards (sometimes referred to as ‘trumps’ or ‘triumphs’) until about 1450-1470 when they are denounced by a Franciscan Friar in the North of Italy who attests that: “there is nothing so hateful to God as the game of Triumphs … [they] are said, so it is believed, to have been given their name by the Devil”. Subsequently these picture cards were merged with the ordinary card deck and the game of Tarocchi was created.

How is Tarot played?

There are many variations on the game of Tarot or Tarocchi as it is known in Italy; some incredibly complicated. A simple form of the game involves the cards being dealt out equally between all of the players. The lead player plays the first card and the other players must follow with a card of the same suit. If they do not have a card of the same suit they must play a trump (Tarot) card. If they have no trump card then they may play a card of another suit. The round or ‘trick’ is won by the player with the highest card of the leading suit or the highest trump card if any trumps are played. People, especially the nobility, often ran up massive gambling debts playing cards.

Other uses of the Tarot

Tarot is also used as a form of divination, and each card in the deck has its own meanings. The cards are laid out – there are many different ways of doing this – and, from the cards drawn and the sequence in which they are drawn, an assessment is made of the current situation and future options for the person for whom the reading is being done.

How did the Museum acquire this deck of Tarot cards?

They were donated by the Honourable Gerald Ponsonby in 1901.

“1901.106. Playing cards (imperfect pack - fifty-four cards). Tarocchi cards. Originally there were seventy-eight cards, viz. fifty-six numerical cards and twenty-two tarots. Twenty-four of the former are missing but none of the latter are missing.

They are rudely printed in black and coloured afterwards - blue, green, red and yellow. The suit marks are cups, coins, swords, and clubs (coppe, danari, spada and bastoni). On the deuce of cups is TAROCCHI FINI. The backs are lattice work in blue and white.”

This object is not on public display as it is part of the Museum’s reserve collections. The World of Playing Cards website has information on lots of different decks of playing cards from all over the world.

Deck of Italian Tarot Cards is located at:
In Storage