Fossils can be formed by a number of processes... some are better than others.

This specimen consists of the fossil valve of a brachiopod from the Carboniferous, approximately 330 -346 million years ago, found in the Fergus Estuary area, Co. Clare.

How are fossils formed?

Fossilisation refers to the preservation of organic remains or evidence of once living organisms, in the geological record.  Fossils may include: hair, teeth, bones, impressions left by skin or feathers, or trace fossils, such as, footprints.  There are a number of methods by which fossilisation may occur; the quality of the fossil resulting from each method of fossilisation will vary according to the method of preservation. 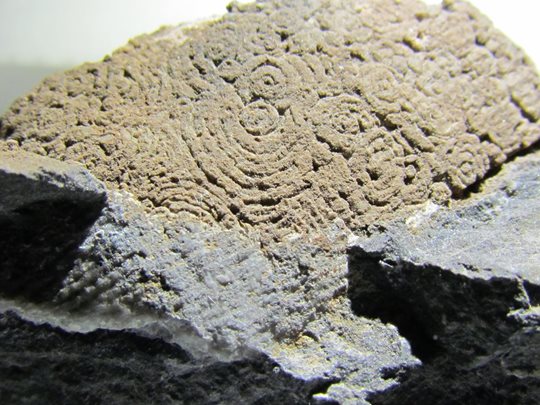 Silicification as a method of fossilisation

The method of fossilisation which is the most variable is replacement.  This can result in fossils which show fine detail or, as in the fossil in Figure 1, it can result in a mere outline of the specimen being preserved.  The method which results in this is silicification, where silica is introduced into specimens as a replacement of the shell mineral calcite, particularly a form known as beekitisation.

Beekite is a form of chalcedony, a microcrystalline form of quartz, named after Henry Beeke, Dean of Bristol (1751-137).  It is usually recognisable as orbicular structures, concentrically layered spheroids.  Apart from the presence of orbicular structures of beekite there are a number of ways to identify if a fossil is silicified: Natural weathering will dissolve the limestone matrix in which the fossil is preserved leaving the fossil proud, steel will not scratch it and if acid is applied it does not fizz as limestone does.

There are a number of problems with silicified fossils:

Fossilisation is a rare occurrence; a plant or animal must die in the right place at the right time, not be predated or scavenged, but be buried under soil or mud or best of all on the seabed. Millions of years later they allow scientists to infer information about the life and evolution of the organism and to track environmental changes.

How did this specimen come to be in the Museum?

It is one of approximately 1,000 specimens collected as part of a PhD study in the 1960’s and was recently gifted to the National Museum of Ireland - Natural History by Southampton University.

This particular specimen is part of the museum’s scientific collection, and is not on public display.  However, another specimen of beekite is on display it is part of the UCD mineral collection and it can be found in geology window case number 229 on the ground floor of National Museum of Ireland – Natural History in Merrion Street.

I am very grateful to Dr Matthew Parkes, Curator of Geology, for his assistance in preparing this article.

McKenny Hughes, T.M. (1889) "On the manner of occurrence of Beekite and its bearing upon the origin of Siliceous Beds of Palaeozoic Age", The Mineralogical Magazine and Journal of the Mineralogical Society, 8, pp. 265–271.

The Formation of Fossils is located at:
In Storage