Arthur Griffith’s statement told the world that the war between Ireland and Britain was at an end.

This note, hastily written by Arthur Griffith, was the first message to the public on the outcome of the negotiations which led to the Anglo-Irish Treaty of 1921. Written for issue to the World Press immediately after signing the Treaty on 6 December, it reads:

“I have signed a Treaty of peace between Ireland and Great Britain. I believe that treaty will lay foundations of peace and friendship between the two Nations. What I have signed I shall stand by in the belief that the end of the conflict of centuries is at hand”.

Who was Arthur Griffith?

Arthur Griffith, born in Dublin in 1871, was a journalist and politician. He had been involved in nationalist movements from an early stage; he was a member of the Gaelic League and the Irish Republican Brotherhood, co-founded Cumann na nGaedheal in 1900, and founded the political movement Sinn Féin in 1905. Having worked as a printer, he established a series of nationalist newspapers, including United Irishman, Sinn Féin, Éire and Nationality. He joined the Irish Volunteers in 1913, but did not take part in the 1916 Rising. Despite this his connection with Sinn Féin, whom the British authorities believed were responsible for the rising, led to his arrest and internment in Reading Jail until 1917. After his release he became Vice-President of Sinn Féin under Éamon de Valera, and was elected as MP for East Cavan. Instead of taking their seats in the House of Commons, the Sinn Féin MPs established Dáil Éireann as the government of the Irish Republic on 21 January 1919 with de Valera as President. Griffth became Acting President during the War of Independence, and was again imprisoned from December 1920 until July 1921.

The War of Independence is generally recognised by historians as having started on 21 January 1919 in Soloheadbeg, Co Tipperary, when seven members of the IRA shot and killed two RIC constables. A series of actions in the form of raids and reprisals followed over the next year. In 1920 the RIC received reinforcements in the form of the British recruited Black and Tans and the Auxiliaries; a division made up of ex-British Army Officers, and the conflict intensified. In December that year, after the events of Bloody Sunday, Ireland was placed under Martial law. From this point the violence and death toll escalated, and when British Prime Minister Davd Lloyd George suggested a conference between the two governments Sinn Féin agreed, and a Truce was called in July 1921. 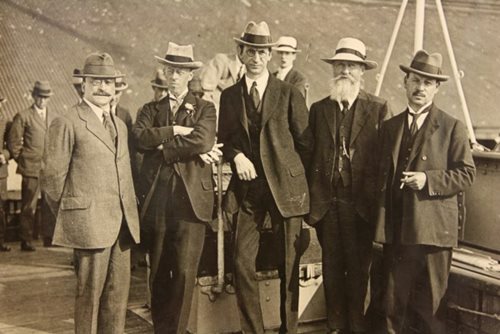 A series of meetings were held and in October an official delegation, headed by Arthur Griffith and including Michael Collins, was formed to carry out the negotiations with the British government. After two months an agreement was reached, officially known as The Articles of Agreement for a Treaty between Great Britain and Ireland.

The Treaty would see the withdrawal of British troops from the majority of the country, but gave dominion status to Ireland rather than that of an independent Republic, retained the Oath of Allegiance to the British Crown, and provided for the establishment of a Boundary Commission to create a border between the Irish Free State and the Northern counties which opted to remain under British rule.

The Irish negotiators; Griffith, Collins, Robert Barton, Eamonn Duggan and George Gavan Duffy, though not happy with the terms, were told by Lloyd George that non-acceptance would lead to a resumption of the war which, at the point the Truce was called, was being lost by the IRA. The delegation eventually recommended the Treaty to Dáil Éireann, and it was signed on the 6 December.

The Treaty was rejected by de Valera and split Republican opinion. Though it was narrowly ratified in the Dáil, this split eventually led to civil war, which started with the occupation of the Four Courts by Anti-Treaty Republicans in April 1922 and its bombardment by Pro-Treaty Republicans, now the Free State Forces, on 28 June. By its close in May 1923 many leaders in the Irish Republican movement were dead, with 77 official executions of Anti-Treaty Republicans during the war. Arthur Griffith died of heart failure on 12 August 1922, and Michael Collins was killed in an ambush and gun battle at Béal na Bláth, Co. Cork, ten days later. While this conflict lasted only 10 months, it was to effect Irish politics for the next decade, and lived long in the memory of the Irish people. The Irish Free State of 26 counties officially became the Republic of Ireland in 1949. 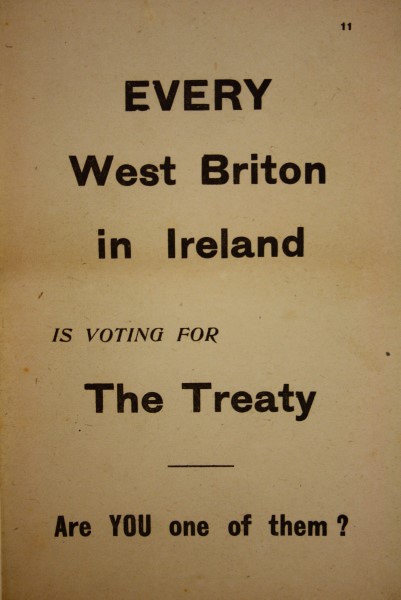 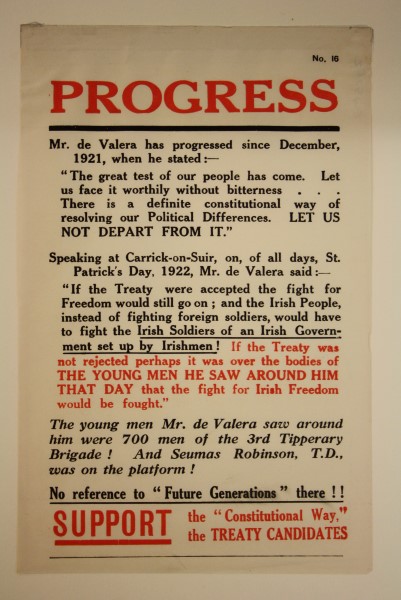 The National Museum of Ireland is pleased to announce that it has received funding from the Department of Arts, Heritage and the Gaeltacht which will be used to digitise important documents in the NMI’s collections. Historically significant items, such as Griffith’s statement, the last letters of the 1916 Rising leaders, original political documents, and prison autograph books will be digitised and made available online to the public.

A copy of the Articles of Agreement bearing the signatures of the Irish and British delegates, including Arthur Griffith, Michael Collins, Eamonn Duggan, George Gavan Duffy, Lord Birkenhead, David Lloyd George, and Austin Chamberlain, is on display in The East Rising: Understanding 1916 exhibition at the National Museum of Ireland, Collins Barracks.

Augusteijn, Joost (1996). From public defiance to guerrilla warfare: the experience of ordinary volunteers in the Irish War of Independence, 1916-1921. Irish Academic Press.

The Signing of the Anglo-Irish Treaty, 1921 is located at:
In Storage